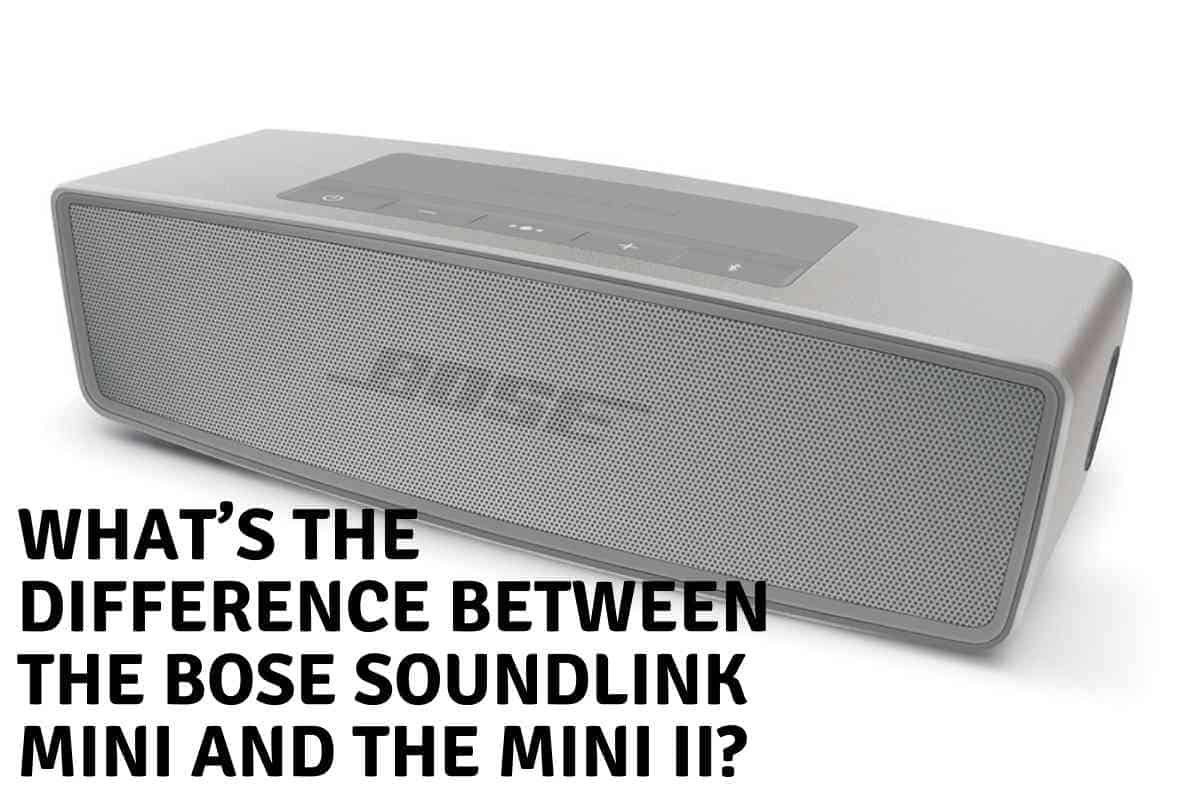 If you have ever read a Bose speaker review written by someone in the audio industry, you might have thought their criticism was harsh.

Audio pros tend to view Bose speakers as being overpriced and basic in their functionality.

However, one thing that Bose really does right – and might not get enough credit for – are their Bluetooth compatibility systems.

The Bose SoundLink Mini has been a game-changer for the company.

Its popularity has recently led to a new entry in the series, the Mini II.

But just how has Bose improved upon the original design? Which generation is the better buy?

What’s The Difference Between The Bose SoundLink Mini And The Mini II?

With the Mini II, Bose has extended the battery life by about 70-80% over the Mini. Audio quality has also been slightly improved and the Mini II now uses a USB-C charging cable instead of the standard plug that the original Mini came with.

Is it worth it to get the Mini II? Are these differences really enough to call this a successful upgrade? Let’s go over the details in some depth.

A History of the Bose SoundLink Mini and Mini II

Let’s go all the way back to where this all started, with the release of the original Bose SoundLink Mini in 2013.

And this is only relatively older than the Mini II.

The Mini was revamped for release in June of 2015.

While the first Mini was positively received, the Mini II offered a number of helpful upgrades.

However, the Mini II was discontinued back in 2018.

The Mini II gave way to the Revolve and Revolve+ speakers.

Revolve had been released prior to the discontinuation of the Mini II, and Bose tried to push for that system as its main Bluetooth speaker system.

But the Mini II’s popularity just would not be quelled.

In late 2019, the Special Edition Mini II was released and has remained pretty well-liked ever since. It is easy enough to find for purchase online, too.

Differences Between The Bose SoundLink Mini And The Mini II

Alright, here’s the biggest difference between the Bose SoundLink Mini and the following Mini II – their battery lives.

The original Mini has a pretty average battery life when you compare it to everything else that was being released around the same time.

Of course, that means some top rivals did it way better.

The Mini was able to get about 7 hours of battery life whereas some of its toughest contenders managed twice that on a single charge.

The Mini II extended the Mini’s battery life up to 12 hours.

Not too shabby, right? It did not beat some of its rivals, but it marks a clear improvement over the Mini.

And, with the Mini II, there is no charging cradle, which does come with the first Mini.

Instead, the Mini II just has itself and its USB-C charging cable.

Quality is something both the Mini and Mini II reflect in their designs.

Built from aluminum, both speakers are models that, if you accidentally drop them, they won’t break.

However, unlike a lot of other portable speakers on the market, neither was designed to be waterproof.

So if you spill your drink on it, you risk frying the circuits.

The Mini and Mini II are both lightweight in design, weighing about 700 grams.

This means you can easily carry them around in your tote bag or purse.

Their dimensions are also basically the same, so you won’t feel as though one is bigger than the other.

One thing that the Mini II has that the first-gen Mini does not is a multi-functional button.

This button allows you to change to another track, use a microphone to make calls, or to activate voice assistants (like Alexa or Siri).

A 3.5 mm headphone jack and a microUSB charging port are located on the left side of the speaker.

All you have to do is plug in to recharge or put in your speakers.

Okay, both of these speakers are pretty straightforward and – dare I say it? – basic.

But, sometimes, basic is not a bad thing.

In fact, for people who do not consider themselves to be tech-savvy, the low-key nature of the Mini and Mini II is refreshing.

So, while there are not a whole lot of nifty features to try out, you get a powerful speaker.

As far as bass goes, both of these Bose speakers do a bang-up job, although the Mini II sees some advancements in this regard.

And pumping out bass is not something that portable speakers usually do that well.

You might also be surprised by just how much power pumps from these speakers.

The Mini II really only has a touch more bass than the Mini.

You will probably notice some dips in the mids, which is common enough for small, portable Bluetooth speakers.

The bass-y lows tend to overpower the mids, which, in some songs, can muddy things up a bit.

As for the highs, the Mini II does have the roll-off typical for Bluetooth portable speakers.

You won’t hear too much harshness, though, unlike you do in other speakers this size.

Pairing your Bluetooth speakers with your mobile devices has gotten a lot easier over the years, and Bose have gone above and beyond to streamline and simplify this process as much as possible for their consumers.

In order to get the Mini II pairing, all you have to do is turn the speaker on.

In fact, when you turn it on, you will hear a voice speaking your set native language, asking you which language you wish to pair in.

It will then tell you that you can pair from the Bluetooth menu on your compatible device.

Most folks won’t need this extra prompt, but those who are new to Bluetooth pairing might appreciate this additional measure.

Pros and Cons of the Bose SoundLink Mini II

Before we close things out on this cross-comparison review of the Bose SoundLink Mini and Mini II, let’s take a few moments to reflect on the pros and cons of buying the Mini II (in which case, you will likely be buying the Special Edition model).

Here are the pros:

Now, let’s move on to a few of the Mini II’s cons:

The Bose SoundLink Mini and Mini II are showing their age as of 2021. We are seeing a flood of stronger but smaller competitors enter the market with better sound quality and more enhanced features.

That being said, the Mini II is a respectable enough little device that sounds better than you think it would.

The differences between these two generations are minimal but noticeable.

The battery life makes up a major chunk of the differences, and some sound quality enhancement gives the Mini II an edge over its predecessor.

If you are thinking about investing in a mid-range Bluetooth portable speaker, then the Special Edition Mini II is something to consider.

But if you want the cream of the crop, neither of these models will likely suit your needs since their battery lives are short-ish and their sound quality merely okay.

There hasn't been an infomercial or cool gadget that I haven't at least thought about buying and trying. Let's just say my old nickname of "Go-Go Gadgets" was well earned.

link to How to Copy a Playlist on Spotify

If you have spent a lot of time listening to music on Spotify, chances are, you have built a robust music library with songs that you've loved for years, and you probably even have a playlist for...

Continue Reading
link to How Long Does A Bose Speaker Last?

Bose speakers are great because of their Bluetooth ability and waterproof technology.  However, I was curious about how long the battery on a Bose speaker would last and how long it would...

HELP US, HELP YOU!

Did you know this site is reader supported? When you use any of our affiliate links to the products we recommend, we get a small commission at no cost to you! That's a win-win in our book!
This site is supported by our participation in affiliate programs. We are a participant in the Amazon Services LLC Associates Program, an affiliate advertising program designed to provide a means for us to earn fees by linking to Amazon.com and affiliated sites. We also participate in programs from eBay, CJ.com and more. With this said, our opinions are always our own and we do not recommend products we do not like.