The Apple iPad is an extremely convenient, easy-to-use device.

Combine it with an Apple Pencil, and it gets so much better!

However, buyers should know that not all iPads include an Apple Pencil.

Which iPad Has A Pen?

If you’re looking to purchase a new iPad and want the benefits of having an Apple Pencil, you need to know which devices work with what.

In this post, you’ll learn more about the Apple Pencil and which iPads it is compatible with.

The Apple Pencil: What Is It?

Apple released the first generation of the Apple Pencil in 2015.

This pencil connects to the iPad via BlueTooth and chargers with a lightning adapter.

This first-generation Apple Pencil was originally sold with the Apple iPad Pro.

While iPads already featured touchscreen technology, this feature was limited by the screen’s interpretation of touch.

With the release of the Apple Pencil, Apple hoped to cater the iPad more to creative types.

At long last, artists no longer had to rely on third-party companies to provide them with a styling pen.

The first-generation Apple Pencil can be purchased separately from an iPad for $99.

While the first generation pencil drastically improved the artistic capabilities of the Apple iPad, a more capable second generation was released only three years later.

The second-generation Apple Pencil attaches to the side of the iPad with a magnet.

Need to switch between tools? No more drop-down menus—simply tap the side of the pencil to change what drawing mode you’re in.

In other words, you’ll see how your motions translate to the screen immediately.

Need more reasons to get the second-generation Apple Pencil? With the second-gen Pencil, you no longer have to plug the pen in to charge.

When the pen magnetically attaches to the side of the iPad, it charges wirelessly! Keep in mind, this may require you to charge your iPad more frequently.

The final reason that the second-generation beats the first-generation is the price.

You get all these improved features for only a $30 increase.

That’s right, you can get a second-generation Apple Pencil, separate from an iPad, for $129.

While the Apple Pencil can be purchased by itself, it is best to purchase it alongside an iPad (unless you already have one).

If you purchase your iPad directly from Apple, it will allow you to add the compatible generation to the order.

While the Apple Pencil will not cost any less when purchased this way, Apple does throw in a free engraving.

If you’re not ready to upgrade your iPad just yet, you’ll need to purchase the Apple Pencil separately.

But wait—how do you know which generation is compatible with your iPad? Let’s find out!

The first-generation Apple Pencil was released in 2015, for this reason, it is compatible mostly with older iPads.

While the first-generation Apple Pencil is compatible with older models, the second generation pairs with newer, more capable, iPad models.

Unfortunately, if you own an iPad not on either of these lists, it will not connect to the Apple Pencil first or second-generation.

But hope is not lost! There are several off-brand solutions you can use to improve your iPad experience.

Alternatives to the Apple Pencil

Pens and pencils for touchscreen devices have been around a lot longer than either of the Apple Pencils.

While these devices are limited in their capabilities, they can connect to nearly any BlueTooth touchscreen device!

Let’s take a look at some alternative devices to the Apple Pencils.

The Logitech Crayon is compatible with all iPads released after 2018.

While this isn’t an option suitable for older iPads, it is a more affordable option for the newer models.

You can make the Logitech Crayon yours for only $70.

Watch the following video to learn more about the Logitech Crayon for iPad!

The StylusHome Stylus is compatible with all touch screen devices.

Yes, that includes iPad models sold prior to 2015.

Both ends of this stylus can be used on your iPad screen.

One end has a wider, softer tip for imprecise moments while the other has a high precision point.

Even better, you get two pens for the price of one with this deal.

That’s right, you can get two StylusHome Styluses for just $15! Order yours from Amazon here! 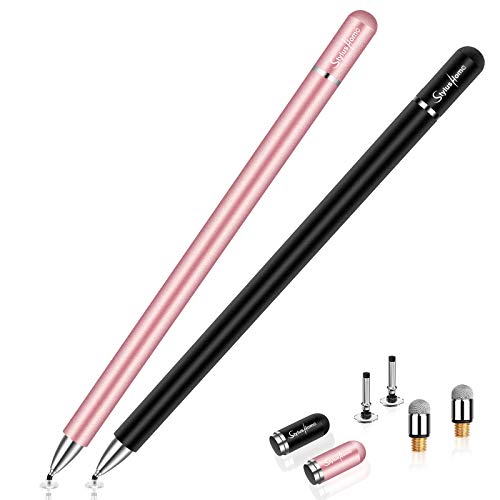 This stylus is only compatible with apps that offer handwriting functions.

This would include drawing apps, the notes app, and a few others.

If you mostly use apps without handwriting functions built into them, your use of the stylus will be limited.

We’ve all seen them—the pens with the soft rubber dome on the end.

But what are they for? Those rubber domes make the pens touch screen compatible.

As you can imagine, these pens are limited in their capabilities.

That said, you can use Stylus Pens to avoid fingerprints on your touchscreen device or to write a bit clearer than you could with your finger.

Another benefit to stylus pens is that they are so widely available.

Some businesses hand out company pens with these domes on the end.

In other words, if you look hard enough, you could get some for free!

While some stylus pens are closed off and only work on touchscreens, others have a small hole for a pen tip to poke through.

This allows you to write on your screen and on paper! (Note: never use the pen tip on your touchscreen device.)

If you can’t find a stylus pen at your local bank, you can order a pack of them online.

Get some Abiarst Stylus Pens for your iPad here! 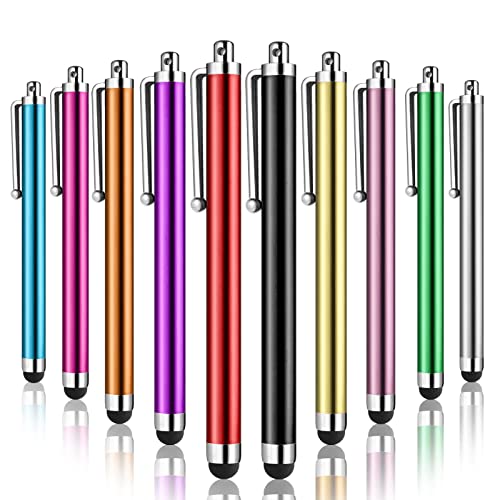